Today we guide you during the discovery of the Sant’Abbondio’s Basilica in Como: a jewel of Lombard Romanesque art that you cannot miss when you come to visit our beautiful city.

The Sant’Abbondio’s Basilica in Como is a true masterpiece of the Como Masters of the early Christian art of the fifth century. The current building is dedicated to the fourth Como’s bishop called Abbondio and it stands on the site of the church dedicated to S.S. Peter and Paul, where Amanzio, third Como’s bishop, was able to bring the the apostles’ relics. For this reason the Sant’Abbondio’s Basilica in Como remained the cathedral until 1013, when this title was transferred to the Santa Maria Maggiore Church (later demolished to have place for the current Cathedral, you can find info about it here).

The exterior of the Sant’Abbondio’s Basilica in Como

The monks who took the basilica’s management were very active in the Como city life of (you also remember the interesting history of the ‘Saint Lucia’s Peace’), they transformed the building built in 1095 with the second bell, but when the church was not more an Abbey it had several restorations. The first, in the ‘500 had changed the aesthetics, recovered than thanks to the ‘800 and actual interventions.

The last restoration dates back to 2003.

The entire Sant’Abbondio’s basilica in Como today have the classic austerity characteristics of Romanesque structures that can be recognized since the facade with bas-relief sculptures, up to the two characteristic bell towers that frame the central apse and are characterized by single windows ornate by floral, zoomorphic, geometric reliefs,and a mullioned window.
Next to the basilica there is the neoclassic cloister Tazzini. 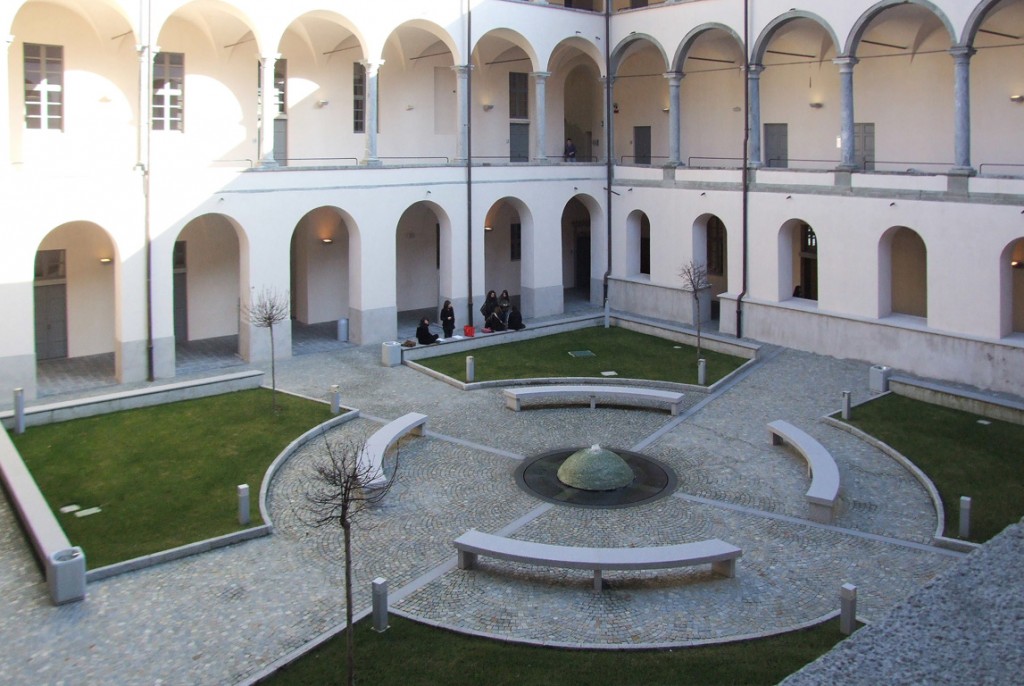 The interior of the Sant’Abbondio’s Basilica in Como

The interior of the church has five naves. The main nave is covered by a flat ceiling supported by tall columns with beveled cubic capitals and ends in the choir with the vaulted ceiling painted with a beautiful starry sky. Walking down the aisle you can see various Como’s Bishops tombs which will take you up to the apse area where you can admire a beautiful pictorial decoration painted with ‘Stories of Christ’ by the ‘Maestro di Sant’Abbondio’, an artist we do not know the name, but it was active in different churches in the first half of the fourteenth century.

Thanks to the various restoration works some ‘300 frescoes have returned. You can also find two paintings, against the facade and at the two sides, which narrate respectively:

Sant’Abbondio Como’s Saint: on August 31st there is a big party open to all.

Sant’Abbondio is the Como patron saint and every year is celebrated, as usual, on August 31st with religious and popular events in the complex which is located next to the basilica. The religious celebrations in the Church who remember the saint and the Como’s Bishops, in fact, combines the typical fair with several culinary and gastronomic events. An unmissable event for both that are for real Como people, but also for the many tourists who may try our beautiful Lake Como traditions. When you arrive at the hotel, ask for information on the most suitable tour: Armando and I are at your disposal to advise you the best activities to do during your stay. We are waiting for you!