The Como Social Theater is a true architectonic and cultural gem within our city. A pearl that witnessed many great artists performing on its stage, players and composers such as Niccoló Paganini, Franz Liszt, Giuditta Pasta and many more.

Just as Wikipedia writes, ‘the Teatro Sociale opened on 28th August 1813 with “Adriano in Siria”. In the years to come the theater underwent renovations and improvements: to mention those that took place in 1838 before Emperor Ferdinand I of Austria’s visit, the extension of 1855 on the part of engineer Leopoldo Rospini, adding the V gallery, lifting the hall by a story and pushing back the stage as it stands nowadays, and lastly those directed by engineer Eugenio Linati in 1899 in occasion of Alessandro Volta’s battery centennial celebrations, adapting the building to electricity’.

The beauty and the capability of hosting a big audience came in handy in 1943, when after bombing raids severely damaged Milan’s Teatro alla Scala, the season was indeed moved to Como. In 2013 the 2nd centenary was celebrated with another renovation (the demolition of the flytower facing the backyard arena), now a proper space for the summer season. 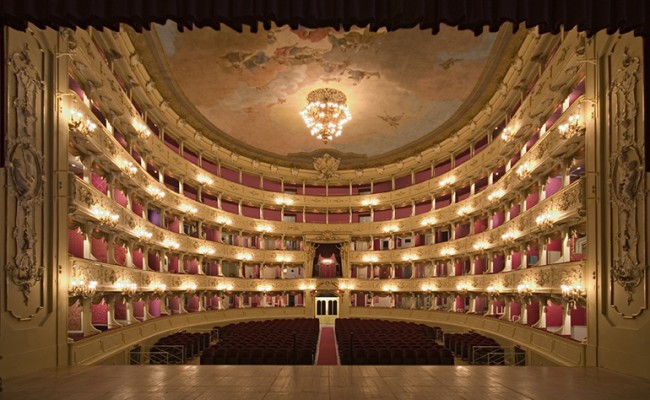 The interiors of Como’s Teatro Sociale viewed from the stage | Ph. ©

From 1st January 2002 the Teatro Sociale (events and management) is passed to the AsLiCo (Associazione Lirico Concertistica) of Milan. The Theater is opened more than 300 days at year and proposes prose, dance and seasons of concerts and operas.

Headquarters of theater and dance schools (classical, modern-jazz, flamenco), is animated by children and teenagers of all ages. For years was part of the Circuito Lirico Lombardo, and it’is also a production theater, with numerous musical projects such as Opera Domani, born in 1996, aimed at more than 3000 teachers and 140,000 children, or Pocket Opera, which brings opera into the small historical theaters, Opera Kids and Opera It for the kindergartens and high schools or as the Competition for Young Lyric Singers or the birth in the 2007 of the Orchestra 1813, an orchestra leader of the theater Symphonic season.

In 2013, therefore, it was the bicentennial foundation that was celebrated with a last restoration (with the demolition of the scenic tower overlooking the backdrop of the arena, became a place for the summer shows) with an ambitious unique project in Italy dedicated to the Como’s city: over 450 people – including chants, white voices, orchestras and dancers, amateurs and practitioners – participated to the production of 200.Com Carmina Burana. The Società dei Palchettisti, which for years has supported the activities of the Theater, still retains its property today.

Every year programs are even richer and interesting, perfect for everyone. To stay in Como means surely to have an evening at the Theater, for that reason we suggest you to visit the official website www.teatrosocialecomo.it to get more info and reserve your ticket. Armando, the staff of the Hotel Posta in Moltrasio and I will be glad to welcome you at the end of your night at the theater, to make it even more special!
Let’s raise the curtain!

The perfect way to spend a romantic weekend on Lake Como

The perfect way to spend a romantic weekend on Lake Como