Many have heard about St. Nicholas’ day and its relation to Christmas and children, but few know where was born this important tradition. Did you know that St. Nicholas is the one who gave birth to Santa Claus?

The origins of the Holiness of Nicholas of Bari

Saint Nicholas, also known as Nikolaos of Bari or Myra, is a Saint known and revered by the Catholic Church, Orthodox and other Christian denominations. The cult of St. Nicholas spread first in Asia Minor, then in the Byzantine-Slavic’ world of and later in the West, making it very popular since the Middle Ages because it was considered the protector of the poor. Nicholas in fact knew of a man who decided to make his daughters as slaves, because could not give them a good dowry. To avoid this fate, handed for three consecutive nights a coins’ bag of at the man’s house, so that they had money for the dowry. He is also considered the Patron Saint of children, because, when he was already a bishop, he resurrected three little children.

The current representation of the Saint with a red dress with white borders came from the book “A Visit from St. Nicholas” in 1823 by Moore. St. Nicholas was described as nice and chubby, this fueled the  Santa Claus’ myth. St. Nicholas is celebrated on May 9th but also on December 6th, in particular, that date is known as the festival of children in the northern part of Italy. During the evening of December 5th, children put on the windowsill of their home socks and shoes, hoping that St. Nicholas overnight fill them with gifts. 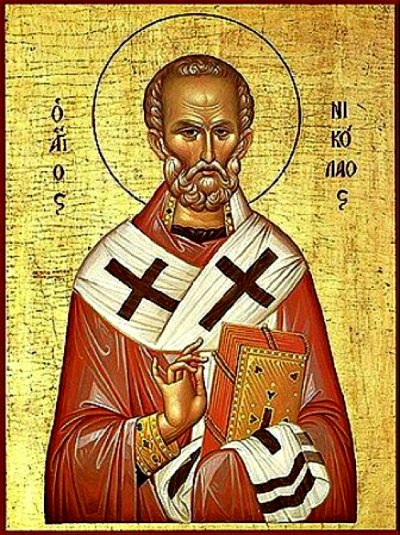 In other northern Europe’s nations, such as Germany, Switzerland, Austria and the Netherlands, St. Nicholas is celebrated every year. In Amsterdam, for example, St. Nicholas runs the street handing out sweets to children. In Switzerland he is known as “San Nicola” or “Samichlaus” in the German canton, and is always accompanied by an aide with dark clothes. In regions where the reform came, St. Nicholas has a hooded cloak and stick, as well as a very long beard. Here too, the Saint brings toys and sweets to children, only when in his book is that children have been good. Even in Freiburg this ceremony is really very impressive.