On 13th December we celebrate Saint Lucia, a Saint who by tradition is also mentioned in some northern Europe’s countries, in Italy and for three centuries was venerated also in Como. Saint Lucia: the shortest day of the year. From Sweden, Finland, Poland, Russia, Denmark and German-speaking Switzerland, to northern Italy regions and cities such as Trentino Alto Adige, Lombardy and in particular Bergamo, Friuli Venezia Giulia and some Emilia Romagna’s places, it is not strange to see children during the 13th December night waiting for Saint Lucia.

The saying that everyone knows tells how Saint Lucia’s Day, one with smaller day light of the year (to be precise the smaller one would be in the next week with the winter solstice, on December 21st). The choice to remember the Saint precisely on December 13th is not a coincidence: the saint is invoked especially for eyes diseases because in this way you can remember her martyrdom. For this reason you can find the classic Nordic imagine with young people who decorate their heads with candles to illuminate the night.

The Saint Lucia’s iconography, which perhaps may seem macabre but captures the essence of this holy person, in fact often shows a young man holding a dish containing his eyes. The young Saint was denounced in the year 304 by her fiancé because she was Christian. Subjected to every kind of suffering, from fire to physical violence, she always came out unscathed. Not even the torture of her gouged out eyes could hurt her, because for a miracle they regrow. The killing took place sliting her throat. 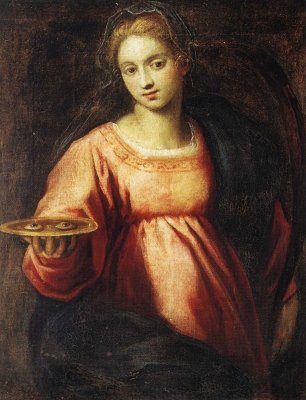 The classic iconography, represents Saint Lucia with a dish containing her eyes.

Saint Lucia and Como: the Saint who brought peace

In Como the historical memory of this Saint has sadly lost and certainly today Como’s people don’t remember that for three centuries was also celebrated in our city. The reason is simple: under the Filippo Maria Visconti government, Milan’s duke, it was signed the “Saint Lucia’s Peace” because it was on that day, December 13th, 1439 that ended a period of serious city’s internal struggles. In Como there were looting, violences, persecutions, also public buildings including the Broletto Nuovo were destroyed by fire. At that time it was in the cathedral square and it kept the notaries’ archive, then it was finally demolished.

Between 1419 and 1420 the friar Bernardino of Siena brought in Como his peace’ message but he found a tragic situation. Then asked help to friar Silvestro from Siena, then beatified, which in 1432 had such strength in preaching that he managed to take out the “Saint Lucia’s Peace”, signed in the San Francesco’s convent which was located where now stands the Como’s court. A witness of this fact is that even today there are many scrolls into the Como’s State Archives collections.

The story that you can read on the scrolls is really fascinating: to share this peace period were involved parishes and associations of all types and levels. The devastated and burned structures were decorated with flowers and paintings of various colors waiting to be rebuilt. In the Saint Francesco cloister they gathered nobles, artisans, mob: notaries signed the peace act giving it legal force. No one brought weapons and shields to the church: Saint Lucia Peace became a holy day with any work activity. The memory of the Holy Como Peace Union remains only in the iconography

It’s really a shame that this anniversary in Como has lost. The deeper meaning of unity, cooperation and peace is a value that can not and must never be forget (and today it seems more actual than ever). Nowadays are remaining only memories of those times, thanks to iconography and art widespread in Como and in many Larian towns, as into the Dom and in the Cosma and Damian’ Church.