Here comes another appoiment dedicated to sacred art on our blog. Our area has many places that you must visit. One of these is the Basilica of San Fedele Como, which is located right in the center of the city that gives its name to our beloved lake.
The Basilica is dedicated to San Fedele, an evangelizing of the Como’s church that was martyr in the third century. Before the Basilica in this central place of the city there was an early Christian church of the the seventh century, the church of Santa Eufemia. Not to be missed, inside, the choir in Lombard Romanesque style, which was built inspired by the wonderful Palatine Chapel of Aachen. The choir is famous for a sculptural decoration of the Magistri Cumacini with monsters, animal figures and griffins.
The Basilica di San Fedele as we see now dates back to 1120 and its style is mostly Romanesque. In 1914 the Church was subjected to a restoration by Antonio Giussani, who altered the facade and bell tower. Inside we can see how some Roman pieces were reused, for example on the back portal or in the capital that was reused to hold holy water. The renovated facade of the Basilica of San Fedele Como was built in neo-Romanesque style with a double salient structure. In the central nave there is a rounded arch, with a mosaic lunette  depicting Jesus Master of Elena Mazzeri (1968) and a circular marble rose window. 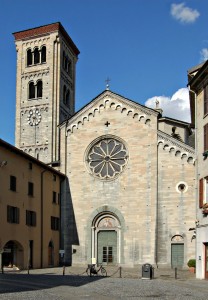 To the left of the Basilica we find the bell tower, which dates back to the bottom in 1271, while for the rest in 1905. The current bell tower replaces the oldest one that collapsed during the 1117’s earthquake. The tower has a square map and on each side there are two rows of windows, mullioned windows or three light windows. At the top is housed a concert in G major, that contains 3 bells. Walking in the East part of the church we find the main apse, which is polygonal and crowned by a small loggia dating from the thirteenth century. Right next to it we can see the “Dragon’s Portal”, famous because of the medieval carvings. Moving inside, we see that the Basilica has a Latin cross, with three naves of four spans each, and is equipped with internal arcades. The nave was built in Baroque style and is decorated with frescoes, while the transept is formed by two pentagonal apses with a deambulatory.
The big marble altar of the right transept has inside a crucifix made in papier mache, above which we admire a fresco depicting the glory of Paradise, the Trinity, some saints, St. Peter and other saints, while lower there are other saints, bishops and popes and still under are angels and archangels. Inside the Basilica there are four paintings depicting scenes from the Passion of Jesus painted by Carlo Carlone. The left transept is dedicated to Our Lady. Inside the marble altar there is a statue of the Blessed Purified Virgin, while the apse is decorated with a fresco of the Assumption of the Virgin. Beside the altar are four frescoes depicting the Marriage of the Virgin, the Nativity, the Annunciation to the Shepherds and the Adoration of the Magi. Inside the Basilica of San Fedele we can hear music coming from a pipe organ built in 1941.
I suggest you spend a piece of your trip on Lake Como to this beautiful church, I’m sure you’ll like it! We are now closed, but if you want to visit our area and the Basilica of San Fedele after the 28th March, we wait you at the Hotel Posta Moltrasio. Obviously, always with a smile!