Muse have a very special relationship with Lake Como. In particular, the band leader, the fascinating Matthew Bellamy, was our neighbor for a long time! The beautiful singer in 2001 met a girl living in Como, Gaia Polloni, and, during their long relationship lasted until 2010, Matthew was fascinated by our lake so much that he decided to come to live there.
Right here in Moltrasio they bought a house to turn in their love nest. In addition, Matthew founded here a recording studio, the Bellini’s studio. Bellamy said that Moltrasio was the perfect place to make a studio. And we are sure that he was right! This was called by Matt “the Bunker” because it was built inside a mountain, and its interior was very similar to an underground bunker. Think, to go to the rooms was used an elevator that went down in the mountain stone.
Matt and Gaia lived here from 2006 until 2010, and they were there into our Restaurant La Veranda a loto of times. When the relationship with Gaia ended, he decided to leave Moltrasio. We do not know the fate of the study and of the house, but we thought that it was all dismantled before the building was put up for sale in the form of apartments in 2013. 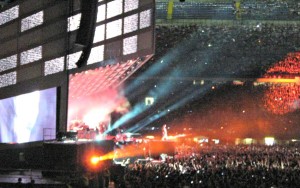 Although the adventure of the handsome Matt in Moltrasio apparently is over, who knows that sooner or later he come back to see us. A little bit of gossip: the British singer, after a long period of suffering due to the break with Gaia, seems to have found happiness. First was with Kate Hudson, and he had also a son, and now he has a relationship with Elle Evans, a model. In short, a very troubled love life.
Lake Como however did well to Matt, who during his time in Moltrasio composed some of the most beautiful achievements of the Muse. In particular, it seems that the wonderful album The Resistance of 2009 was recorded right here in the Bellini’s studio.
I wonder if Matt would come back to see us in Moltrasio when he plays in Milan in 2016 with Muse in May at the Assago’s Forum. They are going to sing in 6 concerts, 14th, 15th, 17th, 18th, 20th and 21st May. If you think that you are going to see a concert, choose Lake Como for your rest after this wonderful evening. Here, where you will find the lovely place that inspired your favorite band in one of their most beautiful albums. We are waiting for you!
Photo Credits: Wikimedia Commons