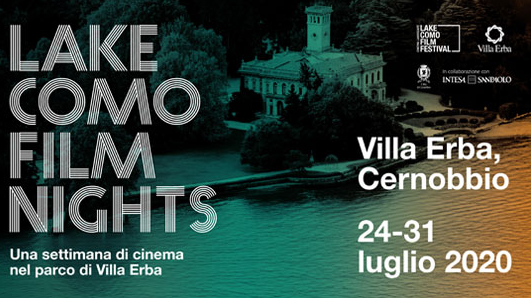 Seven nights of cinema surrounded by nature: this is Lake Como Film Nights 2020.
The film festival, that takes place in Villa Erba in Cernobbio since 2018, is starting with seven evenings dedicated to auteur cinema, from 24 to 31 July at 9.15 pm.

This edition is part of the Villa Erba Open Air summer event, which sees a special edition of the #CulturaVillaErba 2020 project, described by three key concepts: Culture, Territory and Restart Together.

The exhibition opens on July 24 with RealWindows – A suspended world, a project that collects videos and testimonies of the quarantine period, collected in a movie that has received contributions from all over Italy.
The festival will continue with “The lighthouse”, a film inspired by Edgar Allan Poe’s unfinished story “The lighthouse”, integrated by director Robert Eggers together with his brother Max, created a new story.

Sunday 26 July the festival will continue with the film The Knight – The dream of a Cowboy by Chloé Zhao. A dramatic-western movie, presented at the Sundance Film Festival 2018
On monday there will be a journey to the Cordillera of the Andes with The Cordillera of Dreams, an evocative documentary directed by Patricio Guzman.

Tuesday 28 July will be the moment of a classic of world cinema, with one of the excellences of our country, with La Dolce Vita by Federico Fellini.

The festival will resume on Wednesday with another cinematographic transposition of a story, in this case it is the novel “Eurídice Gusmão who dreamed of revolution”, with the film The invisible life of Eurídice Gusmão by Karim Aïnouz.
The last movie of Lake Como Film Nights will be July 30, 2020 with Dead Man by Jim Jarmusch, another dramatic-western film with Johnny Depp.

How to participate in Lake Como Film Nights?

To participate in one of the evenings you need to book your place on the official website of the event.
Villa Erba is less than ten minutes by car from our Hotel Posta, if you would like to participate you can book one of our rooms and stay in our hotel: you can can ask at the reception how to organize your days and evenings on Lake Como.

Villa Olmo: art and culture right on the Como Lake

The “Santuario del Soccorso” in Ossuccio: an UNESCO Heritage site

Villa Olmo: art and culture right on the Como Lake

The “Santuario del Soccorso” in Ossuccio: an UNESCO Heritage site