Como’s Cathedral Santa Maria Assunta is the main religious building and is the reference homonymous Diocese. It is virtually impossible to come and discover the wonders of Como without visiting this magnificent work of art.

Built near to the Lake Como and to the beautiful Piazza Cavour (that now is a square, but in the past it was the harbor for ships coming from the lake), this church is still the nerve center for our city. Near the cathedral arise in fact the Broletto, the wonderful Teatro Sociale, the Terragni’s ‘Casa del Fascio” and it is from here that the main shopping streets begin.
Como’s Cathedral is still recognized as one of the most important artistic monuments in northern Italy. Historical notes are talking about a cathedral near to the lake that was first built in the ninth century, only to be demolished when it was decided to create the new cathedral, that was built in 1396. The façade, that has to be more back respect the Broletto, was built between 1447 and 1489. The fact Broletto initially was wider and longer, there were two arches more than today then sacrificed to make way for the expansion of the cathedral. During the excavations they were found also some foundations that have allowed us to understand how the change not only reduced the  Broletto’s width, but that in this position was located also the bell’s tower, which was destroyed also for enlargement. Since then, the bells were placed in civic tower, that in the end became the bell tower of the Cathedral.
The construction work was completed in 1770 with the dome by Filippo Juvarra. In the last century it has been many interventions to safeguard our great work of art: smog, lightning and weather try hard resistance of the façade, statues and beautiful décor that all tourists and the believer can admire. In 1951 Pope Pius XII named her ‘Minor basilica’. 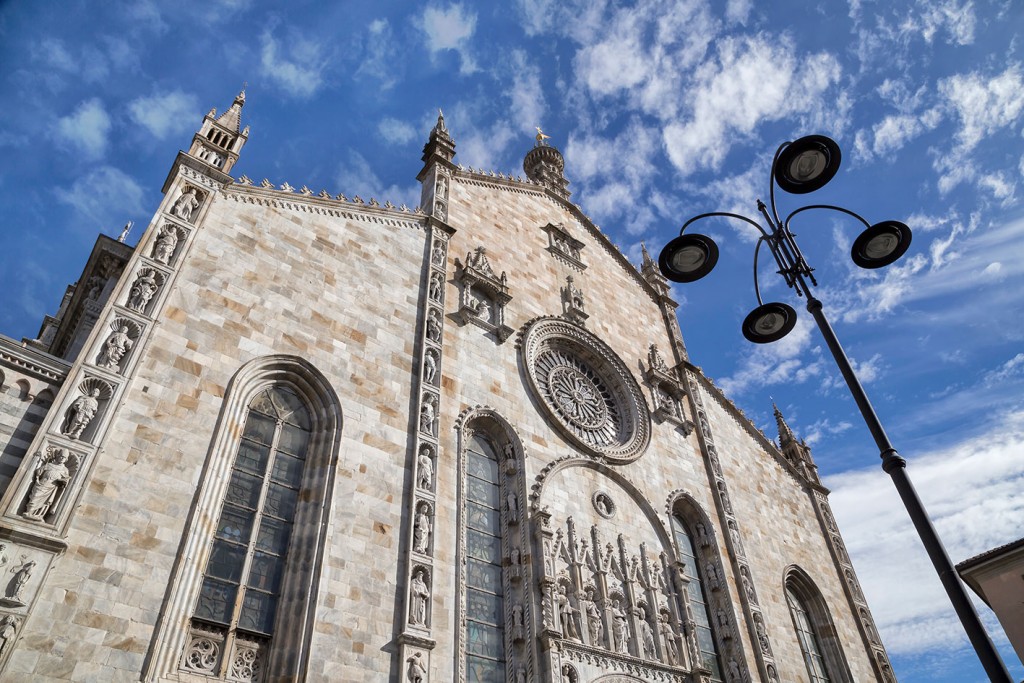 The exterior of the Como’s Cathedral: a work of art in open air

The architecture of the façade anticipates the internal division and reminds for a lot of similarities to the Milan’s cathedral: the style is Gothic and it is vertically divided by four pilasters decorated with a series of sculptures that divide the façade into a central and two lateral. The first one is the portal of entry where we find the rose window and two side windows, elongated; the side parts have an input door and a mullioned window placed above.
Most of the sculptures are Gothic, some of the Renaissance, but all lead to a religious significance. We find behind Adam and Eve (humanity), we find the Saints higher and in the highest point there’s God. Above the portal and in many lunettes depicting scenes from Mary’s life. 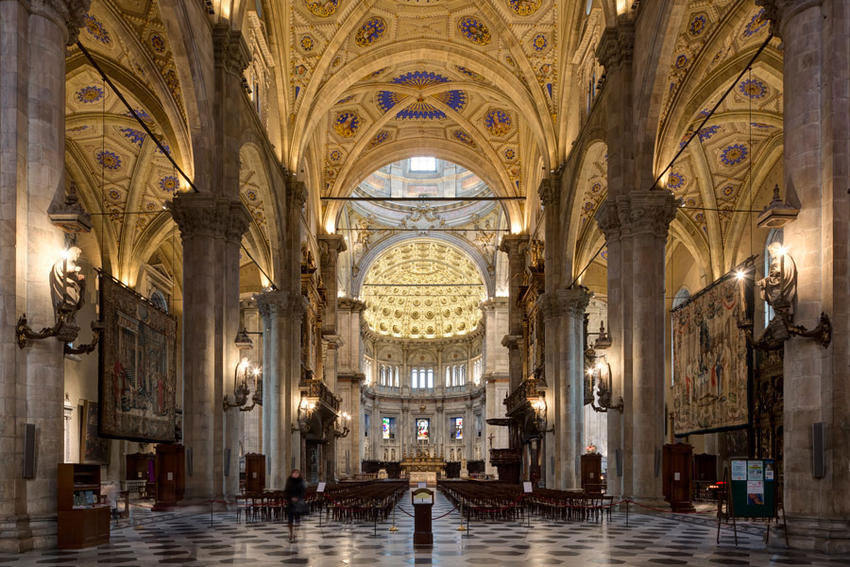 The interior of the Cathedral of Como, a marvel that leaves you speechless

Como’s Cathedral has impressive dimensions: 87 meters long, 56 wide and 75 high. The interior has a Latin cross with three naves and a transept topped by an imposing dome. Inside you can admire precious tapestries of the sixteenth and seventeenth century, and paintings by Bernardino Luini and Gaudenzio Ferrari of 1500. The apse is entirely occupied by the presbytery, which is raised by a few steps. In the center of the Baroque high altar, built in 1728 with marble, onyx and bonze. Around precious carved wooden stalls in the choir. In the Cathedral they are buried many religious and one laical, Benedict Giovio, older brother of the famous Paolo Giovio. Into the Como’s Cathedral there is also a Balbiani Vegezzi Bossi valuable pipe organ from 1519. 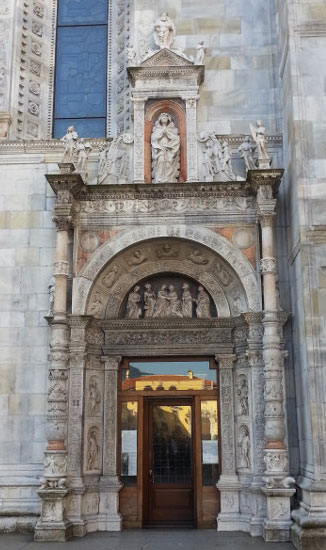 Door of the Frog

The ‘door of the frog’: the curiosity that attracts tourists

A curiosity that attracts many tourists is related to the ‘door of the frog’ which is on the left side of the Cathedral. The door built in the renaissance period is dedicated to the Triumph of the Virgin, depicted by a statue placed at the highest point of the structure. The decorations are symbolic figures and classical statues of saints alternate with cherubs, animals, monsters and festoons in a blaze decoration reminiscent of the decorations of the contemporaries Lombard buildings. But looking good on the left you can see the sculpture of a small frog that, according to tradition, reminiscent of the level reached by Lake Como’s waters during a flood. Where exactly is this frog? You have to find it out, but it will not be difficult because many of the people passing touched the small sculpture, so the marble is darkest in that point.
For more insights about the Como Cathedral ask for information when you arrive at the Hotel Posta at our reception!
I, Armando and all the staff will be happy to give you advice, informations and everything you need to make your special holiday in Como.

A relaxing day on Lake Como, beaches and taxi boats

A relaxing day on Lake Como, beaches and taxi boats